What is Celiac Disease?

Celiac disease is a genetic disease in which the consumption of gluten, a protein primarily found in wheat, rye and barley, initiates an autoimmune response in the patient. The body’s immune system attacks and destroys cells in the small intestine and, as a result, the body cannot properly absorb food. Thus, the patient cannot receive sufficient nutrients in order to grow properly and be healthy. 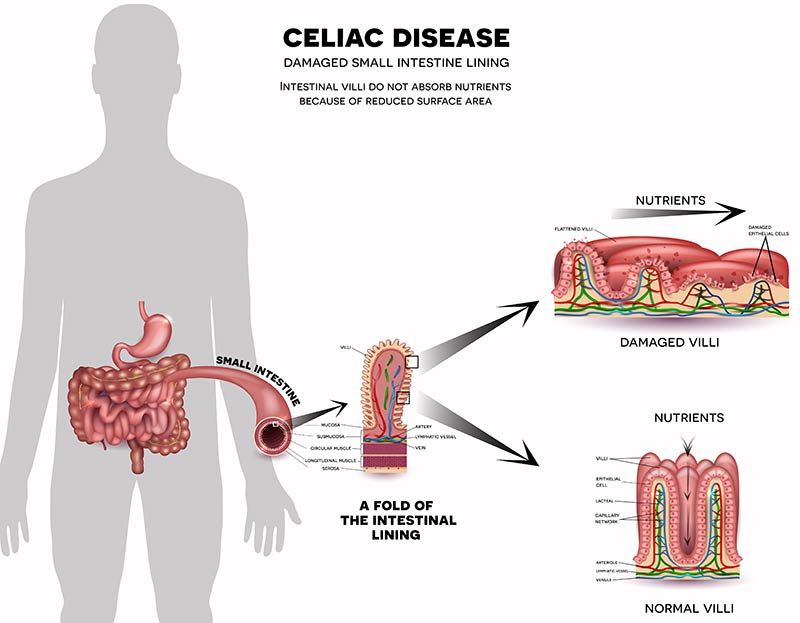 Some of the symptoms of celiac disease are:

How common is celiac disease?

Celiac disease affects 1 in 100 people in the general population. It is a genetic disease, therefore the presence of the disease in a sibling, parent or child increases your risk to 1 in 10. It affects women and men equally and is present both in children and the adult population as it can begin at any age. Unfortunately, it is estimated that about 83% of celiac disease cases are not diagnosed, either because the patient has no symptoms or because the symptoms resemble many other conditions, so celiac disease is not suspected. It is observed that digestive symptoms are more prominent in children than in adults.

Yes, celiac disease is a genetic condition and the autoimmune reaction upon ingestion of gluten remains in the person forever.

Celiac disease is serious and the patient needs to make sure they eliminate 100% of the gluten from their diet in order to stay healthy. Even tiny quantities of gluten, such as breadcrumbs or from cutting your bread on a board where gluten-containing bread was cut, can have devastating effects on the patient. If celiac disease remains undetected and intestinal damage continues, it can lead to serious conditions such as:

How is celiac disease diagnosed?

In order to be able to detect celiac disease, a person must be including gluten in their diet. The doctor will diagnose it by examining family history, a series of blood tests and a biopsy.

It is generally recommended to screen the following individuals:

There are a number of blood tests available in order to detect the antibodies against gluten in the body of a patient. The most common one tests for Tissue Transglutaminase Antibodies (tTG-IgA) in the blood. Others are IgA Endomysial antibody (EMA) and Total serum IgA measurements. However, biopsy of the small intestine is the most accurate way to confirm celiac disease.

There is also genetic testing available, which does not confirm the presence of celiac disease but instead shows if the individual carries the HLA DQ2 and/or HLA DQ8 genes. These, when present, increase the risk of developing celiac disease from 1 to 3%.

What is the treatment for celiac disease?

There is no treatment or cure for celiac disease. In order to eliminate symptoms of the disease, the patient needs to follow a strict, 100% gluten-free diet. A dietitian can help you develop a suitable diet that you can abide by. Nowadays, there are a lot of alternatives to gluten-containing grains, as well as several gluten-free products available in the market. Avoidance of gluten should allow your intestines to heal over time. Furthermore, the patient needs to be monitored by a physician for any nutrient deficiencies and the development of any of the accompanying autoimmune or other disorders.